On the occasion of his business trip to Can Tho City to participate in  the third conference on Climate Resilient and Sustainable Development of the Mekong Delta, Deputy Ambassador of Australia – H.E. Andrew Barnes paid a courtesy call to its leader of the People's Committee on March 12th, 2021. Mr. Nguyen Van Hong, Deputy Chairman of the People's Committee hosted and chaired a meeting with the Deputy Ambassador. 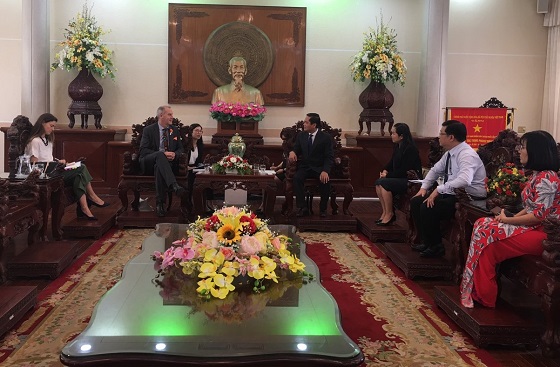 Speaking at the reception, H.E. Andrew Barnes not only lauded Vietnam's success of the 13th National Congress of the Communist Party but also congratulated its amazing and effective control of the COVID-19.

He happily informed his counterpart Australian government's commitments on assistance packages to Vietnam, including AUD 10.5 million to support the country's post COVID-19, AUD 500 million to help Pacific and Southeast Asian countries get better access to vaccines and AUD 21 million for  the ASEAN Centre for Public Health Emergencies and Emerging Diseases.

For the Mekong Delta, he added that at the virtual ASEAN-Australia Summit, Australian PM announced an amount of AUD 232 million for the region to support its economic integration and development. This amount additionally includes scholarships for emerging leaders, strengthening of cyber and critical technology capabilities, and support for the implementation of the Vietnam Enhanced Economic Engagement Strategy.

H.E. Deputy Ambassador stressed that via the Australian government's stronger involvement in the region, the relationship between Australia with the ASEAN in general and Vietnam as well as Can Tho City in particular will be tightened and enhanced, and further expanded to other sectors such as trade and investment.

Towards his speech completion, the diplomat announced the deadline for Australia Awards Scholarships which is due on April 01st. He encouraged eligible applicants from Can Tho City to apply for the scholarship so that they have a chance to study in Australia.

For his turn, the Deputy Chairman showed his happiness and honor to receive the representatives from the Embassy of Australia during their visit to the City, which was conducted shortly after that of the Ambassador in December, 2021.

He briefed the diplomat the relationship between can Tho City with Australian partners in various sectors such as trade – investment, education and development assistance. Specifically, he expressed his attitude towards the Australian government's assistance to the City via its Direct Aid Programs (DAP) to support disadvantaged community in rural areas.

He, however, stated that in spite of the good relationship with remarkable achievements between the two sides, there are still big chances to deepen and expand it. Examples of this proposal can be done by more investments of Australian enterprises or companies in farm produce and food processing activities, project implementation in agriculture, climate change or environment sectors.

In addition, the Deputy Chairman affirmed the aforesaid conference organized in the city will not only a chance to review the implementation of the Resolution 120 of the Government. Neverthelesss, it is also a chance for Can Tho as part of Vietnam listening to and sharing experiences with developed countries, including Australia, to cope with and adapt to climate change conditions.