H.E. Ambassador shared that this trip should have been carried out in 2020 but was delayed due to the COVID-19. He was so happy to be able to conduct the trip to Can Tho City early this year.

The Ambassador said his visit to the AFD-sponsored project helped himself and the delegates understand its strategic roles to the city development in the climate change context. The team was satisfied with the completed workflow of the project. However, there should be close cooperation of both sides to ensure the timeline of the ongoing work volume.

France always attaches importance to promoting cooperation with Vietnam in general and Can Tho City in particular in the education sector, especially at high school and undergraduate levels, the diplomat affirmed. For the city, he stated that it was ranked the 3rd highest number of students studying French in Vietnam. As a result, he took the occasion of this visit to further enhance the education tie between France and Can Tho City.

Smart agriculture to protect environment and adapt to climate change conditions is vital to the Mekong Delta region. The diplomat proposed cooperation in agricultural sector should be boosted to ensure production linkages.

Due to the COVID-19, French companies operated in all sectors have been affected. One of the French companies located in Can Tho is Les Vergers du Mekong. Last year, its turnover dropped down by more than 50% because of the pandemic. The Ambassador, therefore, suggested for concerns from the city tax department for deferred payment or tax reduction.

The France – Vietnam Decentralized Cooperation has been encouraged by the French government. Ambassador Nicolas Warnery thanked Can Tho City for its support and implementation of the signed MOU contents with the two French cities. He suggested more cooperation is needed in preparation for the upcoming decentralized conference planned to be held in Hanoi next year.

Last but not least, French non-governmental organizations have been evaluated to operate effectively in Vietnam as well as in Can Tho City. The Ambassador expressed his gratitude towards assistances by the city provided to these organizations. He voiced his hope for continuous support from its competent ministries and agencies. 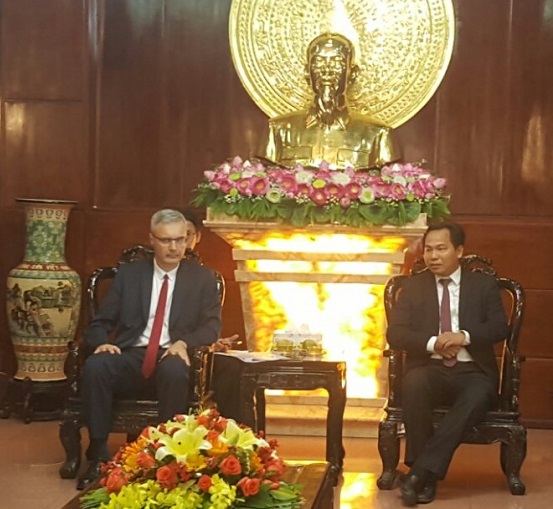 Secretary Le Quang Manh and Ambassador Nicolas Warnery discussed  cooperation ideas between Can Tho City and France at the courtesy call on March 17th, 2021

In return, Mr. Quang Manh treasured concerns and support from the French government given to the AFD project. He assured his counterpart that relevant agencies of Can Tho City would proceed needed administrative procedures to submit the project documents to the Vietnamese government for extension.

The Secretary strongly agreed with the Ambassador's proposal on cooperation in education. He suggested more support from French government to grant scholarships on French language to students, especially those from Ly Tu Trong Secondary High School. Additionally, assistance to and cooperation    with Can Tho University are needed to jointly conduct scientific researches not only in education but also in other sectors.

Joining hands together to cope with climate change effects has been thoroughly considered by the city authorities, the host leader confirmed. He stated Can Tho City, as the center of the Mekong Delta region will take the lead to enhance bilateral cooperation with French partners to do research in smart agriculture for better adaptation to changing conditions of the weather.

Acknowledgement of difficulties faced by enterprises and companies in the pandemic context, the Secretary gave his words in giving them needed supports to overcome their existing barriers. Discussions with local tax authority is essential for decisions on tax deferred payment or tax reduction.

The leader pointed out that the city's good cooperation with French localities, especially with its two partner cities with some activities have been carried out since the date of the MOU signing. He shared that regional cooperation in France is very strong and that Can Tho City wants to create such linkage among the Mekong Delta cities and provinces. A regional council was suggested being established. He asked for consideration by his counterpart by initiating this idea at the France – Vietnam Decentralized Cooperation Conference in Hanoi next year for further discussion and decision.

Finally, the Secretary had the same opinion about the effective operation of NGOs as well as those of France. He claimed that these organizations have worked totally for charitable purposes and that Can Tho City has done well to cooperating with them. He promised to the Ambassador that local relevant authorities will create favorable conditions for and give support to NGOs to help them fulfill their responsibilities for disadvantaged communities.